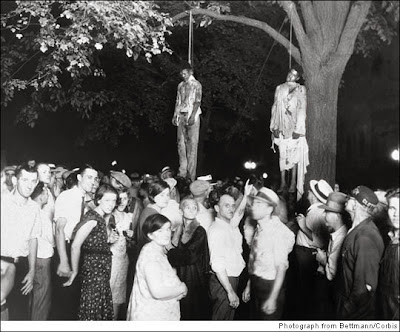 * At the high school in Jena, Louisiana, there is a tree called the White Tree. It is the tree under which only white students sat. This past September a black student decided to challenge tradition and sat beneath the tree. The next day three nooses were found hanging from limbs of the tree.

* At the high school in Litz, Pennsylvania, there is a section of the school parking lot known as “redneck row.” This is where white students who wear clothes with Confederate insignia and put Confederate flag decals on their vehicles park.

* At Columbia Teachers College, a black professor finds a noose hanging from the doorknob of her office.

* In Hempstead Village, Long Island, a noose is found in the locker room of the police department. Taped to the wall near the rope was a newspaper article about the new deputy police chief, who is black.

* In the yard of the Nassau County, Long Island Public Works department, a worker finds a noose hanging from a fence.

* In Valley Stream, Long Island, a noose was found hanging from the doorknob of a construction site at a shopping mall.

* There was also a noose found at a Home Depot in Passaic, New Jersey.

For black people a noose is a symbol of the domestic terrorism practiced against them from shortly after the Civil War to the civil rights movement of the 1960s. Between 1882 and 1968, approximately 3446 black men and women were lynched. That figure represents only those lynchings for which there is a written record. There were lynchings which were never reported. Estimates of the number of lynchings before 1882 vary from 4,000 to 20,000. A Congressional investigation carried out in 1872 said that “as many as 2,000 blacks had killed or wounded in Louisiana alone since the close of the Civil War.” Of the lower 48 states, only four states never had a lynching – Massachusetts, Connecticut, New Hampshire, and Rhode Island.

The origins of the word, lynching, are cloudy, but it is believed it comes from the Lynch family of Virginia who, during colonial times, were given permission by the Virginia legislature to hang criminals without due process of law because of the absence of courts in the area. After the Civil War southern whites began a campaign of terrorism against blacks to deny them the right to vote, to own property, and to live without fear.

I have been wondering why are we seeing this plethora of nooses aimed at blacks in both the north and the south. While talking with a friend recently, an avid supporter of Barak Obama, the answer to my question came to me: A black man is running a serious campaign to be President of the United States.

One of the oddities of the campaigns thus far is that the issue of Obama’s race has not come up. It is as if we are playing this game and pretending that his race is not a factor. The appearances of nooses in Louisiana, a state known for the brutality of its racism, and New York, a state proud of its liberalism, tells me that there are some who are not comfortable with the thought of having a Black president, and they have chosen to express their disquiet through the metaphor of the noose.

But, one could argue, no nooses have been directed at Obama personally or his campaign. But whites who make nooses don’t distinguish one black from another. We are all equally culpable.

These nooses make me fear that Obama’s life is in danger. White racism has gone underground and is emerging to express itself through the intimidating silence of the noose. It is only a short step from that silence to the loud report of a rifle.

"As citizens, we must prevent wrong doing because the world in which we all live, wrong doer, wrong sufferer, and spectator, is at stake; the City has been wronged. Our law codes, with their distinction between crimes where indictment is mandatory and transgressions that pertain only to the private affairs of individuals who may or may not want to sue, take this into account. We could almost define a crime as that transgression of the law that demands punishment regardless of the one who has been wronged; the wronged one may feel like forgiving and forgetting, and there may be no danger for others if it can be assumed that the wrong doer is altogether unlikely to do wrong again. Still, the law of the land permits no option because it is the community as a whole that has been violated."

Comment: America has not reached a consensus that racism violates the community as
a whole.

Posted by Julius Lester at 3:07 PM