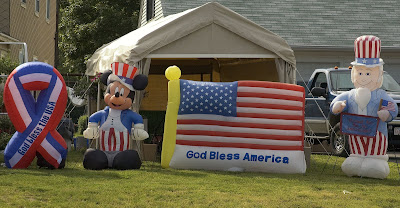 Text and photographs © 2008 by Julius Lester


I’ve been wondering why I do not think of Barak Obama as black. At the beginning of his campaign for the Democratic presidential nomination, this was the criticism of him from many blacks – his roots were not in the American slave experience because his father was Kenyan and his mother was white. Thus, he had nothing in common with American blacks.


The failure of Jesse Jackson’s political campaigns of the 1980s was that Jackson was an exemplar of “identity politics” where one’s racial, ethnic, or gender identity was presented as and seen as the primary and overarching identity. Being black was at the center of Jackson’s identity which made him an ineffectual candidate for president.

For Obama, being black is only part of his identity and not even the core. Can it be that we are, at long last, moving into a post-racial era, an era when race, ethnicity, and gender are put in perspective as being a part of one’s identity but not the defining element of that identity? That would be absolutely extraordinary. Would it mean that racism, ethnic chauvinism and gender bias will have disappeared? No. The carnage that occurred in Rwanda between the Tutsis and Hutus, that taking place now in Kenya between the Luo and Kikuyu is ample evidence that having the same skin color is no guarantee against ethnic prejudices. (And white people have been killing white people for millennium). But in a post-racial era, it is more likely that the institutions of government and commerce will, over time, grow out of Pavlovian negative responses to someone of a different color, ethnicity, or gender preference.

When I look at Obama, I see that his skin color identifies him as black, but it doesn’t mean anything to me. What matters is what he says. What matters is that he is intent on healing the rancorous divisions in our country. What matters is that he gives me hope that the United States can become a nation that I am proud to be a part of. While I like being an American, I am seldom proud of our nation’s actions around the world, and I would like to be.

Apropos of nothing, Barak Obama is truly African-American, as is Charlize Theron. Since I wasn’t born in Africa, do not have immediate African ancestors, I have never been comfortable with being described as an African-American because I’m not. I’m an American, I’m black, and I’m Jewish, and that’s enough for anybody.

In the blog of November 26, 2006, I quoted from a book which said that
“Se virar [say-vee-rahr, Brazilian Portugeuse noun]   -- Literally it means "to empty," but it is used to describe "When you try to do something but you don't have enough knowledge to complete the task." Would having such a verb in English make us more accepting of our inevitable ignorances, make it easier for us to say, "I don't know?”

“Your blog is very nice, but I stumbled across this piece and, as Brazilian, I must tell you that "se virar" does not mean "to empty" in any possible context. The correct literal translation would be something like "turn oneself around".

Anyway, congratulations for your blog, your texts and beautiful photographs!!”

Thanks for the correction and the compliments.

Posted by Julius Lester at 6:34 PM