Americans Get Fat While the Poor.... 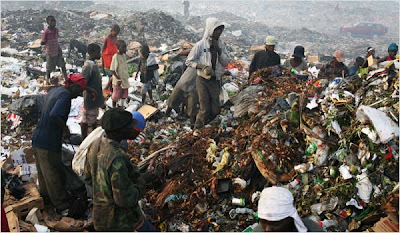 These are people in Haiti searching for food or something to sell from a dump. The April 23, 2008 issue of Paris Match reported that there have been demonstrations protesting high food prices and food riots in Haiti, Ivory Coast, Egypt, Mexico, Mozambique, Cambodia, the Philippines, Pakistan, Senegal, and Kenya. Some weeks, PM reports, "riots explode on all the continents."

The obscenity is that this situation does not have to exist. In the Sunday (June 15)"News of the Week in Review" section of the New York Times, Donald G. McNeil, Jr. wrote, "The whole world has never come close to outpacing its ability to produce food. Right now, there is enough grain grown on earth to feed 10 billion vegetarians." So, what is happening to all this grain? Well, a lot of it is "being fed to cattle, the S.U.V.'s of the protein world." And who is eating the beef from these grain feed cattle? Affluent North Americans and Europeans.

"Theoretically," McNeil writes, "there is enough acreage already planted to keep the planet fed forever….But success depends on portion control." There is something radically wrong when people on every continent are eating from garbage dumps and rioting for bread while Americans are worried about an "obesity epidemic."

According to McNeil, there is a simple solution to the famine being faced by those Paris Match refers to as "les damnés de la terre" who "ne veulent pas mourir de faim" – the damned of the earth who do not want to die of hunger. That solution is to end the "subsidies to American and European farmers" which artificially raise prices. Ending subsidies "would let poor farmers compete which…would push down American food prices and American taxes."

There is an additional solution. The capitalist system engenders an ethic of individualism, greed and selfishness. Simply by living in the United States we are educated to think primarily of ourselves and not care how our behavior affects others – to the point that by 2025, according to the United Nations, 1.2 billion people will suffer from hunger.

Right now 33% of American adults are classified as obese. What will that number be by 2025?

We cannot continue to live as if we are the only people on the planet. Well, sadly, that's not true. We can continue living as we do – uncaring about how our behavior assaults the lives of billions and hastens their deaths.

And, we probably will. 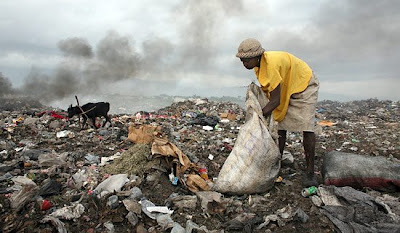 Posted by Julius Lester at 1:00 AM