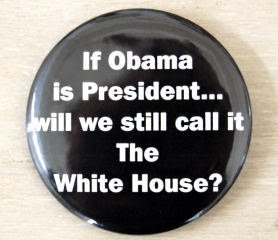 "Lets [sic] Keep the White House White" is a rubber stamp. This bill was found on Staten Island, one of the five boroughs of New York City. This is more insidious than the button because that has to be purchased. A piece of currency with that message stamped on it can appear in my wallet. Republicans "Swift-boated" John Kerry in 2004 with the Internet campaign attacking his military record during the Vietnam War. Foolishly, Kerry waited too long to respond.

The only way to fight the racism represented by the two items here is for record numbers of people to register and vote in November. But there is a chance the Republicans will steal this presidential election as they stole the last two because the state of Louisiana, for one, is already having problems registering the number of blacks who want to vote. On election day in November many blacks will go to the polls believing they are registered voters and will be told they are not because their applications were incomplete or invalid. The evildoers are already at work disenfranchising blacks.

Fortunately the Obama campaign is aware of problems registering voters in Louisiana and other states. At least in this election McCain does not have a brother who is governor of the state that can swing the election.

Unrelated to the above: I was sitting in the dentist's office last Friday afternoon when I heard over the radio that Tim Russert had died. Like everyone else I was shocked, but I do not consider his death to be an event worthy of the platitudes being bestowed upon him. A writer on the Psychology Today website wrote that Russert's death "produced the greatest national outpouring of grief for a single 'civilian' since John Lennon was killed in 1980." (Americans grieved far more for Princess Di.)John Lennon has been dead for 28 years and is still remembered by millions. Five years from now Tim Russert will be remembered only by those who knew him personally.

For the the record I want to say that I never liked Tim Russert, thought he was egotistical and filled with too great a sense of self-importance. I was saddened by his death but, as I indicated in yesterday's blog, I am saddened by the deaths of those whose names I know only because I read them on the obituary page.

Posted by Julius Lester at 1:03 AM

Coming out of "lurkdom" to tell you thank you so much for your books (I'm a huge fan), your contributions to listservs, and now your blogs. I am grateful for your insights.