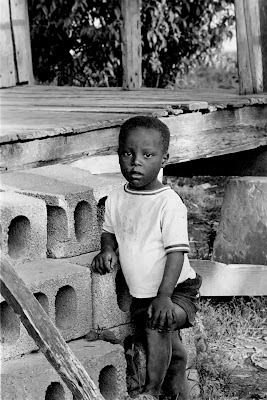 Text and photograph © 2007 by Julius Lester

I like Angelina Jolie. With her multicultural family she reminds me of the black American and expatriate entertainer, Josephine Baker, who eventually adopted twelve children from all over the world. However, quite unwittingly, it seems that Jolie has started a fad, and children from black Africa are becoming the new "in thing" for the well-to-do and celebrated.

Madonna adopted a black child from Africa. Now actress Mary-Louise Parker has adopted a black African child. Paris Hilton has announced she is going to Rwanda in November. "I want to visit more countries where poverty and children's issues are a big concern. I know there's a lot of good I can do just by getting involved and bringing attention to these issues."

This concern by white celebrities for the black children of Africa reminds me of the differing attitudes southern whites had of American blacks and Africans in my youth. I was 18 when the film “Boy on a Dolphin” starring Sophia Loren and Alan Ladd came out in 1957. I really wanted to see it, but in Nashville, Tennessee, and throughout the south, movie theaters were segregated. Blacks had to buy tickets at the window, then walk down the alley and enter a side door through which there were stairs to the balcony. I had never done that, and I wasn't about to start, not even to see the outlines of Sophia Loren's breasts in a wet shirt, which ads for the movie had focused on.

A friend of mine and I borrowed some robes from African students at the college we were attending. Wearing these robes and speaking in what we felt were African accents, we went to the movie theater, bought tickets at the window, walked in the front door and saw the movie. In the mind of white southerners of the time, blacks from Africa were acceptable; American blacks were not.

Why is it that poor black children from Africa are acceptable to white celebrities, but poor black children from America are not? There are thousands of black orphans in every major city across the country waiting for someone to adopt them. And if Paris Hilton is sincere about “bringing attention” to “poverty and children’s issues,” she does not have to leave Los Angeles.

Fifty years have passed since my friend and I were admitted to a segregated white movie theater because it was thought that we were Africans, not American blacks. It seems like African blacks are still more acceptable.