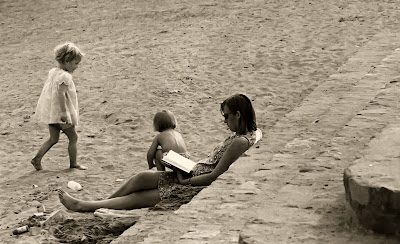 Photograph and text © 2008 by Julius Lester


CORRECTION: Those of you who watched the first installment on PBS Wednesday night of “The Jewish Americans” already know that I erred in my last blog on when the shows will air. They are being broadcast on successive Wednesdays. I think I will appear on the last segment, which will be broadcast on January 23.

Reading as much as I have since the beginning of 2004, I find myself thinking a lot about the experience of reading. The pleasures are many – the encounter with someone else’s mind, the joy some writers bring to language, the pleasure a book gives by taking me into a time and/or place I could not go/have never been, the pleasure of being led to experience times and places that never were nor will be.

In the next few blogs I will be sharing the books that meant the most to me last year, and some of the passages I underlined.

It is a wonderful book. I reached a point where I couldn’t put it down. The writing is really, really good, as are the characterizations, plot, insights into marriage and family life, and being Jewish. As I wrote in my Commonplace Book, “It’s the best book I’ve read in a long time.”

“…so much unsaid between him and Deborah, his daily anger – anger he’s known and not known, not known how thick until, at this moment, it comes to him in its temporary dissolution. For months, now, or for years, each of them too busy to take in the other’s burdens, they’ve been keeping score of injuries. Who’s at fault? Who has disregarded the other’s schedule more? Each of them is accumulating grievances in a secret account; enough and they can be ‘fed up’ and walk out. Or perhaps not walk out; but give up on the marriage. Nourished by these grievances, they speak continually in ironies. (I notice, my dear, you’re rubbing salt into the cuts you’ve given me, but don’t think I’ll give you the satisfaction of complaining; it’s what I expect from you).” p. 37 [Italics in original]

Since almost anything one underlines in a book is autobiographical, this passage was an accurate description of the dynamics that developed over time in my previous marriages. How is that two people marry each other because of a very real love and yet, that love does not seem sufficient to help them past “accumulating grievances in a secret account”? I’ve concluded that liking the person you marry and being liked by that person is, perhaps, more important than love. It seems odd to say, but you can love someone but not like them. In the novel the couple’s marriage survives, in part because they like as well as love each other.

“Deborah feels the gnaw in the pit of her stomach that comes with walking into the unknown world not dressed in a story.” p. 181

Sometimes when I am out doing errands I look at people and try to imagine them getting dressed that morning. What made them decide to put on that particular dress, skirt, blouse, suit, pair of pants, shirt, tie, etc.? Each of us is a story. Our decisions about what to wear dictate what story we are telling that day. During the 32 years I taught at the University of Massachusetts, there came a time (my 50th birthday) when I no longer felt comfortable with students addressing me by my first name. So I began coming to classes dressed in a three-piece suit and tie. Doing so changed the dynamic of their relationship to me. I was no longer their “friend”. I was their professor, and they addressed me as “Professor Lester.” And I became a better teacher.

What story will you be tomorrow?