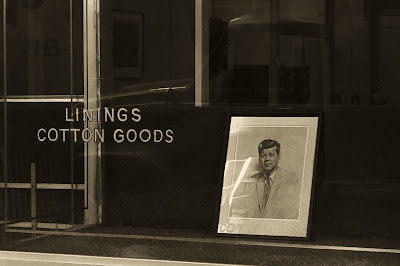 When the Democratic race for a presidential nominee began, I doubted Hillary Clinton's sincerity, and was unsure about Barack Obama. If my feelings did not change I thought I would write in Al Gore’s name in November. But a photograph in Saturday’s New York Times and the desperation envinced by Billary (credit to Frank Rich of the Sunday NY Times for this descriptive word) in South Carolina has helped make me a supporter of Barak Obama.

The photograph in the Times was of Hillary Clinton giving a speech, and sitting on the stage behind were Rep. Charles Rangel (D- Harlem) and David Dinkins, former mayor of New York. Both are black and being as highly placed in New York politics as they are, it would be political suicide for them not to actively support Hillary’s candidacy. But my immediate impression seeing the three of them together was of age. This might sound strange coming from someone who just turned 69, but it was not the number of years that disturbed me. It was the visceral recognition that Hillary Clinton’s candidacy represents the same ol’ Democratic Party I’ve been disgusted with for years. I looked at her, Rangel, and Dinkins, and I didn’t see new ideas, new energy, or, most important, vision. Looking at them I did not feel inspired or hopeful. Looking at them I got depressed. Looking at them I was certain that the surest way to insure that another Republican becomes president is for the Democrats to nominate Hillary Clinton.

From the beginning of the primary season I have thought that Hillary Clinton was making a mistake in having her husband be an active part of her campaign. I would have respected her if she had told Bill to stay home, that she would win or lose on her own. Increasingly, however, she has become dependent on her husband’s charisma and oratory, which certainly does not make her seem like the strong and independent woman she claims she is. Her increasing reliance on her husband raises the very real question of just who would be president if she were to win the nomination and the election. This would not be a question in the minds of many people if Bill Clinton had not become so central to her campaign, if Bill Clinton didn’t say “we” more often than he says “Hillary”. Do we really want Bill Clinton back in the White House? While I thought Clinton was a fairly good president, I do not think he was so good that a return to a Clinton presidency is warranted, and that is what we will get if Hillary becomes president because her political thinking does not differ from Bill's.

During the campaign in the South Carolina primary it was disconcerting to see the former president acting like a rabid dog. Perhaps he took too seriously Toni Morrison’s proclaiming him the first “black President”. Maybe he thought he really was black, and therefore, could attack Obama personally without black people being offended. I think he knows otherwise now.

Finally, and most important, Billary does not understand that people are sick and tired of hearing candidates talk about their “plans”. Both Al Gore and John Kerry made the mistake of saying, ad nauseum, “I have a plan.” Insurance companies have plans. What the Republicans have understood and the Democrats haven’t is that people want a leader who has a vision which he or she is passionate about. People want a leader who will inspire them, who will make them want to aspire to the best in themselves, not the meanest. Barack Obama understands this.

Billary harps on the fact that Hillary has experience and Obama doesn’t. One of the virtues of youth is that it does not have experience, that it does not have a good sense of what is and is not possible. Thus, youth will be audacious; youth will try to accomplish things that have no chance of success and succeed. Youth will dream, while experience will look at those dreams and say, “Yes, but….” The simple fact is that people with experience in government have put America where it is today -- a nation crumbling from the greed of banks, a nation suffering from a megalomania that believes every nation in the world should be democratic and Christian, a nation at war internally because it has become the norm to demonize those who do not hold politically conservative and Christian values.

Writing on the op-ed page of Sunday's NY Times, Caroline Kennedy, JFK's daughter, endorsed Barack Obama and wrote, “I want a president who understands that his responsibility is to articulate a vision and encourage others to achieve it; who holds himself, and those around him, to the highest ethical standards; who appeals to the hopes of those who still believe in the American Dream, and those around the world who still believe in the American ideal; and who can lift our spirits, and make us believe again that our country needs every one of us to get involved.”

Barak Obama appears to be that person. However, even if it turns out that he isn’t, I know already that Billary is not, and if they become the Democratic nominee, come November I’ll be writing in Al Gore’s name.