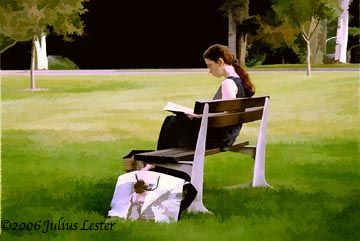 Here are some wonderful words from the book I mentioned in the previous blog, In Other Words: A Language Lover's Guide to the Most Intriguing Words Around the World by Christopher J. Moore (Levenger Press: Walker & Co. ISBN 0-8027-1444-7).

Esprit de l'escalier (French idiom - es-pree de less-kal-iay): The witty remark that occurs to you to late, literally, on the way down the stairs.

Korinthenkacker (German noun - core-in-ten-cuck -er: A "raisin pooper", someone so taken up with life's trivial details that they spend all day crapping raisins.

Mierenneuker (Dutch) The idea is the same as the word above except in Dutch it means "ant f--cker."

And my absolute favorite is another Dutch word:

Uitwaaien (noun oot-vay-en: To walk in the wind for fun.

How wonderful that the Dutch found this experience so wonderful and so important that they have a word for it. It's supposed to be windy tomorrow here in western Massachusetts, so I may go for an uitwaaien.

[The digital art above is one of a series of eight, thus far, called "Alone, Herself". Most are of my wife at moments when she is unto herself. This is Alone,Herself #3 and is based on a photograph taken outside a museum in Williamston, Mass. Note the museum shopping bag in the foreground].