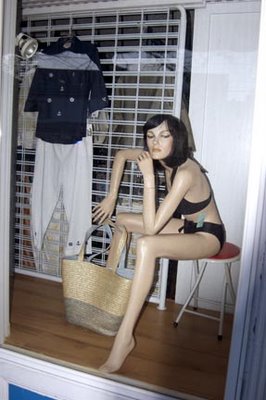 I love women's fashions. Perhaps it's because my mother wanted a girl, didn't get one but named me after her anyway. On Thanksgiving I was probably the only man in America who watched football while leafing through the latest Vogue. I subscribe to it, as well as W, InStyle, Harper's Bazaar, and Paris Vogue. I also subscribe to three fashion blogs, and my iPod is filled with videos of fashion shows.

I mention this because in one of the magazines I came across a mention of a book, How to Walk in High Heels: A Girl's Guide to Everything by Camilla Morton (Hyperion). The book is composed of very short sections of how-to information on everything a woman could possibly want to know about how to walk in high heels, how to get a mortgage, how to hang wallpaper, "How to pick up dog doo with style," and "How to swim with shades on." Some sections are written by people in fashion, such as "How to look good in a photo" by super model Gisele Bundchen, "How to choose a designer," by fashion designer Stella McCartney, and "How to compile your own soundtrack," by Jade Jagger, daughter of Sir Mick.

The book is written with an understated wit that seems to be a gift the English have (the author is English). As I browse through the book, I am envious. There should be a book like this for men like me who hate going to hardware stores because men assume that other men know about "men" things like screw and bolts and tools whose names I don't know and whose functions I can't imagine. I always leave hardware stores with such feelings of inferiority that I have to rush home and look at a video of an Oscar de la Renta show.