The study of languages has expanded my emotional vocabulary 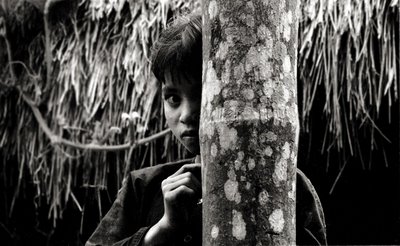 One of my regrets is that I do not have a facility for languages. I have studied three - Spanish, Hebrew, and presently, French - but I do not have fluency in any. Yet, even the study of them has expanded my emotional vocabulary. For example, Hebrew verbs grow from a three letter root structure, creating relationships between actions and experiences that cannot be translated. On the other hand, French verbs seem finely attuned to the nuances of time. It is not enough that an event happened in the past. The verb form one uses to describe the event can convey something about one's experience of the event. Thus, my emotional vocabulary becomes richer. A few more words from the Christopher Moore book.

Literally it means "to empty," but it is used to describe "When you try to do something but you don't have enough knowledge to complete the task." Would having such a verb in English make us more accepting of our inevitable ignorances, make it easier for us to say, "I don't know"?

A "melancholic, bittersweet word" used to describe the feeling you have for someone you once loved but no longer feel the same way about.

Miljø is a Norwegian word which means society. But it also means the environment. If we had a word in English which made society synonymous with the environment, would our nation have treated the environment so callously?

And the last word for today is the most untranslatable word in the world. It comes from the Tshiluba language of the Republic of the Congo.

"It describes a person who is ready to forgive any transgression a first time and then to tolerate it for a second time, but never for a third time."

In the spring of 1967 I spent a month in North Vietnam, one of the first Americans to visit the North during the Vietnam War. This photograph was taken in a small village. I was the first black person most North Vietnamese had ever seen. Thus, this little girl peered out at me from behind a tree. I wonder if the sight of me expanded her emotional vocabulary?

Posted by Julius Lester at 1:52 AM