Books That Changed Your Life 3 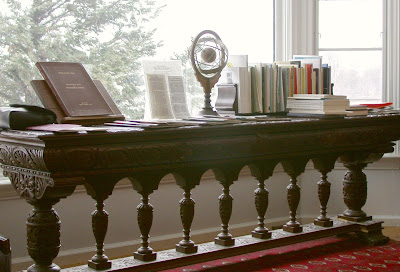 This contribution to Books That Changed Your Life comes from Abby Kingsbury in Acton, Massachusetts

“There are so many books that have deeply affected me, but the book that first sprang to mind is The Phantom Tollbooth by Norton Juster. My brother, whom I adore, is eight years older than me and a brilliant person - kind, smart, creative, eclectic. The first time I felt myself to be more than a little sister to him, the first time that I felt somewhat on his intellectual plane, was after reading The Phantom Tollbooth. Dan and I had many long discussions about the book, most especially its subtle humor and twists of language, and thus began a life-long habit of sitting and talking together about literature and philosophy. There are two messages in the book that have helped to form how I approach my life: that the impossible can be achieved, and that it's far better to appreciate the here and now than to waste time and life wishing you were somewhere else.”

“People say that life is the thing, but I prefer reading.”

Brouhaha – In a fifteenth or early sixteenth century French farce, a priest disguised as the devil cried out, “Brou brou brou ha ha brou ha ha!” By the mid-sixteenth century the French brouhaha was used a noun meaning “hubbub, uproar.”

In traditional synagogue worship, prayers can be chanted very rapidly and very loudly with no effort on anyone's part to chant in unison. The cacophony of voices could easily sound like confused and meaningless speech.

Thus, the pseudo-devil’s speech of “Brou brou brou ha ha brou ha ha” may have been making fun of Jews. The Christianity of the time believed that Jews were a diabolical people, and what else would the devil say than words heard at synagogues?