Bush, Dr. King, and the War in Iraq 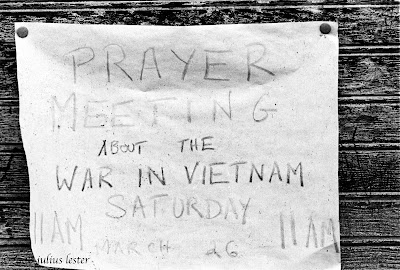 I hope President Bush lets Martin Luther King, Jr. Day pass without saying anything about Dr. King and what he stood for. Although Bush professes to be a devout Christian, there is no comparison between his practice of Christianity and Dr. King's. If Dr. King were alive, we know that his mellifluous voice would be raised against the sending of more young men to be killed in Iraq, would be raised against the one billion dollars a week our nation is spending in a vain effort to impose democracy on a country whose cultural and political values are alien to us. Dr. King would be calling the president to task for the ease with which he spends a billion dollars a week on this ridiculous and obscene war and the ease with which the president ignored New Orleans when Hurricane Katrina struck and the ease with which he continues to ignore New Orleans.

Even worse is that people are not in the streets protesting against a war every bit as wrong as was the war in Vietnam. But during the Vietnam war every young man 18 years old and over was subject to be drafted. That war came knocking at the door of a significant number of parents with sons eligible to be sent to war, and those parents finally said, you can't have my child. There is no draft now, and although the majority of Americans oppose Bush's latest act of immoral stupidity, the war has no impact on the lives of most of us. We register our opinions to pollsters, and
Bush ignores our opposition because it is an opposition that exists only on paper.

And fundamentalist Christians and right-wing Republicans think pornography is obscene. Compared to spending one billion dollars a week on the war in Iraq, pornography is a wholesome as mom and apple pie.

The following is excerpted from a sermon Dr. King gave at Riverside Church in New York City on April 4, 1967. In the months preceding this sermon, Dr. King had begun criticizing the war in Vietnam and had been attacked by many, even liberals, who thought he should restrict his words and activities to civil rights. In this speech Dr. King laid out the reasons why he would be remiss if he did not speak out against the war as well as his reasons for opposing the war. The words below are from the end of the speech.

"We as a nation must undergo a radical revolution of values. We must rapidly begin the shift from a 'thing-oriented' society to a 'person-oriented' society. When machines and computers, profit motives and property rights are considered more important than people, the giant triplets of racism, materialism, and militarism are incapable of being conquered.

"A true revolution of values will soon cause us to question the fairness and justice of many of our past and present policies. On the one hand we are called to play the good Samaritan on life's roadside; but that will be only an initial act. One day we must come to see that the whole Jericho road must be transformed so that men and women will not be constantly beaten and robbed as they make their journey on life's highway. True compassion is more than flinging a coin to a beggar; it is not haphazard and superficial. It comes to see that an edifice which produces beggars needs restructuring. A true revolution of values will soon look uneasily on the glaring contrast of poverty and wealth. With righteous indignation, it will look across the seas and see individual capitalists of the West investing huge sums of money in Asia, Africa and South America, only to take the profits out with no concern for the social betterment of the countries, and say: "This is not just." It will look at our alliance with the landed gentry of Latin America and say: "This is not just." The Western arrogance of feeling that it has everything to teach others and nothing to learn from them is not just. A true revolution of values will lay hands on the world order and say of war: 'This way of settling differences is not just.' This business of burning human beings with napalm, of filling our nation's homes with orphans and widows, of injecting poisonous drugs of hate into veins of people normally humane, of sending men home from dark and bloody battlefields physically handicapped and psychologically deranged, cannot be reconciled with wisdom, justice and love. A nation that continues year after year to spend more money on military defense than on programs of social uplift is approaching spiritual death.

"America, the richest and most powerful nation in the world, can well lead the way in this revolution of values. There is nothing, except a tragic death wish, to prevent us from reordering our priorities, so that the pursuit of peace will take precedence over the pursuit of war. There is nothing to keep us from molding a recalcitrant status quo with bruised hands until we have fashioned it into a brotherhood.

"This call for a world-wide fellowship that lifts neighborly concern beyond one's tribe, race, class and nation is in reality a call for an all-embracing and unconditional love for all men. This oft misunderstood and misinterpreted concept -- so readily dismissed by the Nietzsches of the world as a weak and cowardly force -- has now become an absolute necessity for the survival of man. When I speak of love I am not speaking of some sentimental and weak response. I am speaking of that force which all of the great religions have seen as the supreme unifying principle of life. Love is somehow the key that unlocks the door which leads to ultimate reality. This Hindu-Moslem-Christian-Jewish-Buddhist belief about ultimate reality is beautifully summed up in the first epistle of Saint John:


"Now let us begin. Now let us rededicate ourselves to the long and bitter -- but beautiful -- struggle for a new world. This is the calling of the sons of God, and our brothers wait eagerly for our response. Shall we say the odds are too great? Shall we tell them the struggle is too hard? Will our message be that the forces of American life militate against their arrival as full men, and we send our deepest regrets? Or will there be another message, of longing, of hope, of solidarity with their yearnings, of commitment to their cause, whatever the cost? The choice is ours, and though we might prefer it otherwise we must choose in this crucial moment of human history."

In the spring of 1966, someone in a small Mississippi town felt compelled to write out his or her concern about another war on a piece of paper and nail it to a tree. I do not know if anyone came to that prayer meeting. I do not know if any prayers that may have been offered did any good. But the results are secondary to the fact that this person felt that he or she had to do something and did what was in their power to do.

So should we all.

Posted by Julius Lester at 2:01 AM