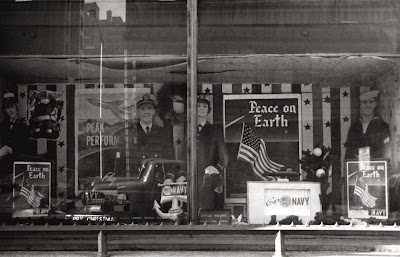 
1. In the aftermath of the hanging of Saddam Hussein, I saw a photograph in the New York Times that startled me. It was a photograph of one of his daughters, crying. The image made me wonder: Is it possible for a child to see its parents as others do? Does a child even want to know its parents in the way(s) others do? And even if a child knows the evils a parent commits, does it change the child's feelings about the parent? Sometimes yes, but most of the time, no. After all, to the child - and as long as our parents are alive, a part of us remains a child - parents have no existence separate from that of being his or her parents, and whatever else they do is irrelevant compared to their existence as parents. Mother and father are eternal verities.

Seeing the photograph of Hussein's daughter crying at the news of his death, I was glad to know that someone loved him.

2. In New York City earlier this week, a man named Wesley Autry was waiting for the subway with his two daughters, ages 4 and 6. A young man waiting on the subway platform had a seizure and fell onto the tracks into the path of an oncoming train. Mr. Autry jumped onto the tracks, pulled the young man into the space between the rails, and lay flat. The train passed over them.

Mr. Autry has become a national hero. He was given a medal by the mayor of New York; he was on Letterman last night; Donald Trump gave him $10,000; editorial writers are waxing eloquent over what they see as an act of heroism.

Am I the only one who is thinking: What if he had been killed? He chose to try and save the life of a stranger rather than insure that his daughters would have a living father. If he had been killed, his daughters would have been left to wonder why their father thought the life of a stranger was more important than theirs? And, if he had died, all the newspapers and talk shows now extolling him would be calling him irresponsible.

Is our nation so desperate for heroes that it would see heroism in an act of parental irresponsibility? Apparently so.

"Don't believe everything you think."

Posted by Julius Lester at 5:56 PM