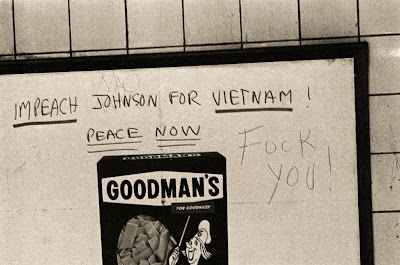 Almost every evening I sit at my computer scanning negatives from the late 1960s into Photoshop and making prints. Only now, thirty or so years after taking a photograph do I have the time to finally make prints. I am becoming reacquainted with who I was in those years. I'm also looking back on what those years were like. Some photographs evoke strong and mixed emotions, like the one above which I printed last night for the first time.

I have no memory of taking it, but that is so with most of the images from that time. But I do remember the anger so many of us shared about the war in Vietnam. Looking at this photograph, however, I was sad. Change “Johnson” to “Bush” and “Vietnam” to “Iraq”, and nothing has changed.

We are a nation led by men who do not read, men who are, for the most part, uneducated (and having a degree from Yale does not automatically make one an educated man.) We are a nation led by men who are not reflective, who do not think, who do not engage in thoughtful, probing discussions with people who disagree with them. So, here we are, 40 years later, involved in another war of our own making, a futile, stupid war in which thousands of people, not only American soldiers, are dying stupid, senseless deaths.

But in 1967 the sons of middle-class Americans were being sent to Vietnam to kill and die, (though our president and vice-president managed to evade their patriotic duties). Now it is the sons and daughters of the poor - blacks, Hispanics, Native Americans, and whites - who are volunteering to go because many have no other options. Others fighting are the sons and daughters of men and women who are patriotic in the conventional sense of waving flags, people who believe that when one's country calls it is your duty to respond, that when the president speaks he is telling the truth. These men and women started out as supporters of the war in Iraq, but they, too, have become disillusioned with the arrogant ignorance that passes for policy in the minds of Bush and Chaney.

What is sad is that the people who were angry in 1967 are not angry now because their sons and daughters are no longer drafted into the Army. But why can’t these people be angry now? Are we only capable of being angry when we and our children are personally threatened? Are we so without empathy that we weep only when it is our children killing and being killed in a stupid war?

I get the feeling that the country is simply biding its time, waiting for the elections next year and a Democratic president. Don’t be sure that Hilary or Obama or John Edwards can make that much a difference. Getting involved in a war is somewhat like getting married. It’s a lot easier to go into a marriage than it is to get out.

But looking back at 1967, Johnson was not impeached; the war in Vietnam did not end until 1975, and while our angry protests played a role, it was the Vietnamese military that deserves the credit for forcing American troops out of their country.

Today we line up to buy iPhones and Harry Potter.