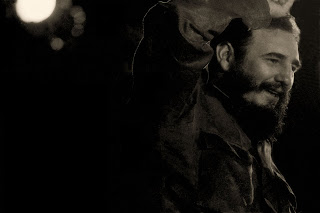 Last Thursday, July 26, there was a photograph on the front page of the New York Times of Raul Castro, brother of Fidel, speaking at the annual July 26 rally. With a start I realized that on July 26, 1967, I had been sitting on that same stage listening to Fidel Castro gave a two hour talk.

I had been invited to Cuba to participate in a festival of protest songwriters and singers. (From 1961-68 I was a folk singer and protest song writer and recorded two albums for Vanguard in 1966 and 1967. The albums show up periodically on eBay. A cd of songs from both albums was issued last summer by Ace Records in England. The cd is available on iTunes). The day after I arrived in Cuba Stokely Carmichael arrived, and I moved into his suite on the top floor of the Havana Libre Hotel. (Stokely was head of SNCC - Student Non-Violent Coordinating Committee, and he had put the organization on the front pages of practically every newspaper in the world with the cry for Black Power. I had been working for SNCC as a photographer out of its Atlanta office since the summer of 1966, and that was how I knew Stokely.) Only because I was with him did I end up meeting and traveling for three days with Fidel Castro through the Sierra Maestra Mountains.

I first saw Fidel at the July Twenty-Sixth rally. Having read in the American press about his long speeches, “harangues,” the press called them, I was surprised that the reality was far different. I heard him speak on three separate occasions. On this day he talked about the Cuban Revolution and its goals. The third time was a two hour talk on Marxist economics to a packed auditorium in Havana. The second time I describe below. On each occasion my experience was that Fidel was a master teacher. His speeches were more like conversations in which he was able to make you feel that he was speaking only with you.

The photograph above was taken in a small town in the mountains where Fidel gave the second speech, a speech about the artificial insemination of cows. He spoke as a peasant to peasants about increasing cattle production. He talked glowingly about a massive bull the government had recently purchased, of how much semen the bull would produce, and how many cows could be impregnated in how many years. He also spoke of efforts by the CIA to prevent Cuba from buying the bull and of subsequent CIA efforts to kill it.

The next morning Stokely and I met Fidel at breakfast. What was supposed to be a three-hour ride back to Santiago turned into a three-day expedition, whose itinerary was created at any junction where Fidel remembered an agricultural cooperative he wanted to visit, a friend he had not seen in awhile, a hospital he wanted to check on, or a youth camp where he stopped to play basketball.

During those three days and a final visit with Fidel shortly before Stokely and I left Cuba, I found him to be a man without pretense, very personable, down-to-earth, an extraordinary teacher, and a man who cared deeply about the poor. Yes, Cuba was poor, but no one was going without the basics. The same could not be said of the good ol' U.S.A.

Regrettably Fidel will die without Americans having the chance to evaluate for themselves whether he was the demon the U.S. painted him as. Neither was he a saint, and I do not defend the absence of dissent, and civil and artistic freedom in Cuba. Cuban socialism trades civil rights for taking care of people's basic needs. American democracy exchanges tending to people's basic needs for civil liberties. I do not understand why either country can't do both.

Because Castro placed basic needs over satisfying the greed of sugar plantation owners and Mafia families, the U.S. has maintained a boycott of the country for almost fifty years.

Who's to say that we might have learned things of value from Fidel, and he from us. But that did not happen, and when he dies, the Cuban population of Miami and south Florida will dance in the streets.

Posted by Julius Lester at 8:18 PM