The Iraq War and Our Future 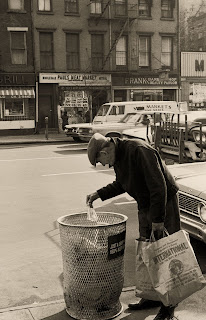 In response to my recent blog on the absence of protest against the war in Iraq, Rev. Dan Harper, First Unitarian Church, New Bedford, Mass., e-mailed me the following:


"There are some protests happening now. I think part of the problem is that when protests do happen, the media doesn't cover them, so they stay small -- there's no momentum building. Back on March 16, I was at the Christian Peace Witness for Iraq in Washington, D.C. 4,000+ people (including Christians, Muslims, Buddhists, Jews, etc.) protested outside the White House, and 200+ clergy and religious leader got arrested. There was no national press coverage to speak of -- just a short piece in the Metro section of the Washington Post. I know that's not a huge protest, but the ANSWER Coalition protest the next day in DC didn't get much more press coverage.

"Not that I think there's some 'media conspiracy.' But let's face it, ownership of the media has been mostly consolidated in the hands of a few big corporations that don't have much interest in seeing an end to the war (e.g., Rupert Murdoch is a supporter, Fox supports the war, Gannett seems to be at best neutral). It's not a conspiracy, just neglect. And with the demise of serious newspapers, and the concomitant rise of news as entertainment, we hear less about the war than about Paris Hilton's arrest -- which admittedly makes a dramatic story, but some perspective is badly needed.

"Thus when you report in Friday's post that Nancy Ewart of San Francisco believes that much of the protest has moved to the Web, I tend to agree with her. Things are happening, but they're 'hidden in plain view.' Which means that policymakers can conveniently ignore what protests there are."

The Boston Globe (Tues. 8/31) reports that a Congressional Budget Office study says "American taxpayers will feel the financial consequences of the war for at least a decade." And that statement was based on the assumption of U.S. troops pulling out today. "We are now spending more than 10 percent of all the government's annually appropriated funds" on the war. Even if the number of troops are reduced from the current 190,000 to "30,000 by 2010, the United States Treasury would still have to provide up to $500 billion more to sustain those troops, as well as pay other expenses."

And what, you might be wondering, are those other expenses? Well, medical costs of $9 to $13 billion dollars if 30,000 to 75,000 troops are stationed in Iraq on a more or less permanent basis as U.S. troops are in Korea. Then there's the money needed for "extended medical care and disability compensation for wounded soldiers and survivor's benefits for the families of the thousands of combat-zone fatalities."

Whenever this obscene war ends, it is going to cost the United States well over one trillion dollars. Representative James P. McGovern, a Democrat from Massachusetts, is considering proposing a "war tax" on all Americans to cover the war's cost.

Maybe, just maybe, he's found something that will make the American people angry enough to fill the streets in protests too large for the media to ignore.

Posted by Julius Lester at 8:22 PM