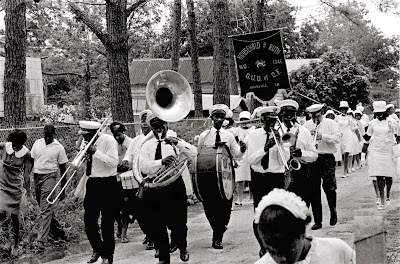 A Free Man of Color by Barbara Hambly is the first in an extraordinary series of eight murder mysteries. The central character is a free black man in New Orleans in 1832. He received training as a physician while living in Paris. After the death of his wife he moves back to New Orleans, his home. Unable to practice medicine because he is black, he is, however, also a trained pianist and finds sporadic work as a piano teacher and band leader.

Each novel involves a murder, of course, but what makes this series so extraordinary are Hambly’s descriptions of New Orleans and its complex society of slaves, Creoles, free blacks, French speakers, and the new, English-speaking intruders the residents call “Americans”. I could feel the heat and humidity in her descriptions, smell the filth in the street and the odors from outhouses.

Because her descriptions of race relations, blacks, and slavery are so accurate, I assumed Hambly was black. I was surprised to learn that she is white. She writes about black people and slavery as well as some blacks and better than others.

She is also an amazingly prolific writer, being the author of several science
fiction series as well as a series about a vampire. The Benjamin January series has ended, as she never planned to do more than eight books.

Michael Connelly and Archer Mayor write well, but Hambly's language is more poetic and evocative. The plots in the novels of this series are quite complex, and there are a wealth of fascinating characters. In Notes at the end of each novel, Hambly shares her extensive research and provides more insight into the 1830s in Louisiana.

Here are some quotes from various books.

“When January sat at the pianoforte he could look out through the triple doors of the ballroom to the lobby and see men and women – clothed in dreams and harried by the weight of their nondream lives – as they came and went."
A Freeman of Color, p. 48

“It does something to you, to know in your bones that justice is something other people get.” p. 127

“A man doesn’t have to be good to write great music. But there must be something about him that is great.” p. 130

Die Upon A Kiss by Barbara Hambly

“…the night air was like warm glue.” p. 44
Comment: If you've ever been to New Orleans, you know this is what the heat and humidity there feel like.

“He [Benjamin] had been hired, many times, to play at the wakes of white people, and had always found them eerily silent and cold. Why stifle your genuine grief, grief at the shortness of life, grief at the vast network of might-have-beens that cover all the earth like a shining nimbus, only because you are not closely connected with the point at which Death has touched this time? p. 158

“Afterward she wept, the way rocks would weep if they could when an earthquake breaks them apart….” p.165

“At night they [mosquitoes] would settle on Jim’s little tent of netting like a thirsty cloud.” p. 193

Posted by Julius Lester at 1:50 AM