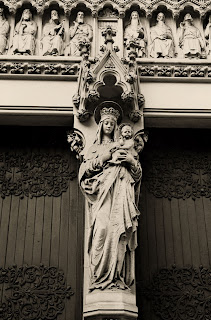 Daughter of the Forest by Juliet Marillier (544 pp.)

“This is probably the best book I have ever read,” I wrote in my personal commonplace book after finishing this, the first novel of a trilogy. I would probably qualify that now, but my use of hyperbole is to indicate what a wonderful experience reading it was. And isn't that one of the major reasons we read - to have experiences we could not otherwise?

The skill of Marillier’s storytelling is breath-taking. How she manages to tell the entire story through the eyes and voice of her heroine is beyond my ability as a writer.

Because the novel uses well-known motifs of fairy tales, knowing what is going to happen only heightens the anticipation for the denouements you know has to come. The characters are engrossing, and the writing concrete and vivid.

I realize I haven’t told you what the novel is about. That’s because plot summaries bore me, but I suppose I should say a little something. The story concerns a pagan family, a widower father, his daughter and four? five? sons. The father remarries; his wife is a sorceress who turns the sons into swans who can only resume human form once a year at the summer solstice. The daughter, who is also the narrator, can save her brothers from the curse if she weaves garments for them out of a particular material and puts them on the brothers before they turn back into swans at sunset on the summer solstice. But if she says one word to anyone about her brothers or her task, the curse will never be lifted from the brothers and they will be swans forever.

The setting is Ireland during that time when paganism encounters the new religion of Christianity. I don’t know why I am fascinated by this period in Ireland, not being Irish and never having been to Ireland, but I am.

This novel is a real feast. A couple of passages I underlined:

“There were those whose love spilled over into their every gesture, and so was shared by all who knew them. But they were rare folks indeed.”

“But there is one thing you must remember, if you forget all else. There is no good or evil, save in the way you see the world. There is no dark or light, save in your own vision. All changes in the blink of an eyelid; yet all remains the same.”

This reminds me of another book set in the same place and time period.

It is much shorter than Daughter of the Forest, but just as good in its way. This book is also written in the first person and gives a vivid description of life in Ireland at the point further in time when Christianity has just gained supremacy over paganism. However, unlike Daughter of the Forest, in which the one Christian character is a positive figure, Confessions of a Pagan Nun is more of an indictment of Christianity.

I read this novel two years ago and don’t recall any of the plot details, but it was a wonderful reading experience, and I underlined a lot. Here are a few of those underlinings.

“It is a holy duty to know the truth and tell it.”

Comment: That’s tricky and can cut many ways, but it is a carefully written sentence. The initial “holy duty” is “to know the truth,” and that is different than assuming that what I already know is the truth. Telling the truth is the easy part. Knowing the truth; there’s the rub.

“I began then to know words as immortal things one could see and touch, each having a color and shape like a pebble that never suffers disease or death. I dreamed of bags of polished pebbles; each bag a story; each bag holding one precious jewel among the many pebbles or a dark, black stone that was death’s eye.”

“...that which is sacred does not care by what name it is called.”

“He taught me how a man and woman can give each other pleasure and tangle their limbs together. But my soul and his never recognized each other.”

“...believing one thing rather than another does not make that thing the truth.”

“...I saw the living spirit in blades of grass and felt the affection of the rain on my face.”

“I cannot see that any religion is true that does not recognize its gods in the green wave of trees on a mountainside or the echo of a bird’s song that makes ripples on a shadowed pool. Even in the quick snap of a hare’s neck and the gleam of living in the eyes of the fox whose mouth is full of the hare’s fur, there is God, even though He is not understood.”

“But even suffering can be sacred if it compels one to give and receive kindness and to despise harmful acts.”