Books I Liked This Year - 3 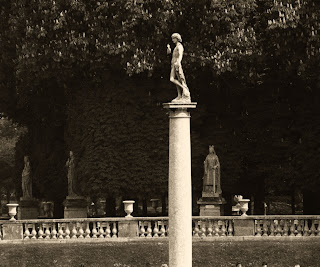 This book was sent to me by, Kathy Sloan, a photographer and friend from my days in New York, who knew that I have been studying French. I don’t know why I’ve always been drawn to things French, especially the literature and art. Though my college major was English and American literature, the ideas that shaped me during those years came from the pens of Sartre, Camus, Simone de Beauvoir. Existentialism was the only philosophy that made sense after I dispensed with the Christianity of my minister-father, and it makes even more sense now.

Despite my love of things French, the thought of learning the language, with its strict grammatical rules, filled me with terror. So I took Spanish in high school and college. But, in 1967, when I went to Paris for the first time, I felt at home immediately. After that trip I made my first attempt at learning the language, but eight-to-noon on Saturday mornings was no time to learn anything.

What finally made me overcome my terror was reading The DaVinci Code aloud to my wife. There are many French place names in it, as well as snippets of French. I was disgusted with myself that I did not know how to pronounce many of the words. The least I could do was learn how to pronounce the language. Being an autodidact, I bought some cd’s and started listening and practicing.

After a few weeks, I had a sartorial moment: I didn’t have to teach myself this time. I could take a class. And so I found myself returning to the university where I had taught for 32 years, sitting in classes with adolescents I used to teach.

At age 68 my goal is to become as fluent as I can in reading French. Writing and speaking require thinking in the language, and I don’t think my old brain is supple enough for that. But my facility at reading is advancing, slowly but surely, and I feel like I have, finally, at long last, found the long, lost love of my youth, and this time I was bold enough to take her hand, and I won't let go.


Alice Kaplan’s book captured the feeling for me of what it is like to love this language. Although she is a professor of French at Duke, the book is autobiographical, meaning not academic, meaning, it is beautifully written. She describes her lifelong relationship with the French language. A few of my underlinings:

“…in French vowels are primary and consonants follow from correct vowels. The first priority is for the mouth to be in the right position to make the vowel sounds: lip muscles forward and tighter than in English, the mouth poised and round. Americans speaking French tend to chomp down hard on their consonants and swallow their vowels all together.”

“Paris…seemed to be organized for looking. I had never been in a place where there was so much to observe; the benches, the wrought-iron balconies, the long cars that looked like bugs, the policemen with their huge caps, the food sold outdoors, bookstalls outside along the river. Everywhere I went, there was a new tableau to take in.”

“Mr. D and his wife took me and my mother to dinner that night. He ordered a special soufflé for dessert that came out high in the waiter’s hand; when I put my spoon in it all the whites from the Manet painting came staring up at me, and I ate the truth and light of impressionism in my soufleé.”

“From the beginning I loved the fact that Micheline healed people with language troubles. ‘Dr. Micheline Veaux: Maladies du langage’ (illness of language) was inscribed on a bronze plaque over her doorbell. Micheline Veaux is a phoniattre, a physician who specializes in problems, physical and mental, that show themselves in speech. People recovering from throat operations, stutterers, aphasiacs, immigrants with psychological traumas in their newly acquired tongue. People who, for one reason or another, speak in the wrong pitch -- too high or too low – and hurt their voices. She works with them on a keyboard, and helps them find their register. Her perspective is psychoanalytic; she believes, for example, that it is dangerous to cure someone of stuttering if the stuttering fulfills a psychic need that the person hasn’t understood. Language is not a machine you can break and fix with the right technique, it is a function of the whole person, an expression of culture, desire, need. Her respect for everything that is alive in speech was profoundly new to me, and it corresponded to my need to wonder about language. Inside our language is our history, personal and political.” p. 98

Comment: Two things stood out for me in this passage. One was that Micheline worked with people using a piano keyboard in helping them “find their register.” I find that when I read a French passage aloud to my wife and use the same voice register in which I speak English, I stutter. However, when I use the voice register of the male voices who do voice-overs in French films like Amalie, the French flows easily from my mouth.

I was also taken with Micheline’s observation that it was dangerous “to cure someone of stuttering” because the stuttering might fulfill some psychic need. I stuttered as a child. It probably came from being naturally left-handed and being forced to be right-handed, something done commonly in the 1940s. At some now forgotten point in time, I stopped stuttering, but the stutter returns when I get very excited, and when I read French aloud in my English-speaking voice.

Posted by Julius Lester at 1:58 AM