Photography In Our Time 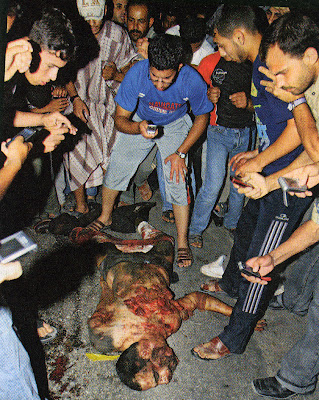 (“Onlookers photographed the mutilated body of Samil al-Madhum
with their cell phones. Leader of the Al-Aksa Brigade, a group close to Fatah,
he was executed by men of Hamas and dragged through the streets.”
Paris Match, June 27, 2007)

I don’t know what is more shocking in the above photograph -- the bloody, mutilated body, or the men taking pictures of it with their cell phones. (I counted six men with phones. There could be others. And is the right leg of the man in the blue shirt resting on the left leg of the corpse?). The expressions on their faces are so intent, so serious, and indifferent to the bloody corpse at their feet. What is important is whether the pictures they are taking are in focus.

The photograph reminded me of an almost forgotten strain that courses through American history from after the Civil War to the mid-sixties. I refer to the practice of mob violence in which black men, primarily, were hanged, their bodies mutilated for crimes they were often innocent of, for rapes of white women they had often not committed. This practice was called lynching, and it was not confined to the South. Of the lower 48 states, only Massachusetts, Connecticut, New Hampshire, and Rhode Island never had a lynching. Blacks were not the only victims, as Chinese, Italians, Jews, Mexicans, and white males were also victims of mob “justice”.

Part of the ritual of lynching was having one's picture taken in front of the hanging, mutilated body. Taken by professional photographers, the photographs were made into postcards and sold. Such postcards were then mailed to friends and relatives. A few years ago an exhibit of lynching postcards was held in New York, and other cities. A book of the exhibit, Without Sanctuary, has been published.

When I saw the above photograph in Paris Match, I thought of the photographs of lynchings, as well as the pictures U.S. soldiers took at Abu Ghraib of the torture of Iraqi prisoners. I was also reminded of Susan Sontag’s book, On Photography, where she writes of the desensitizing effect photography can have on our emotions.

As I look at the photograph above, and especially at the facial expressions, the fact that a dead man lies at their feet is not important. What is important is that they have proof that they were present at this event which others will be talking about. However, by taking pictures, they are also able to distance themselves emotionally from the horror at their feet.

That is the danger of photography, whether we are taking a picture or looking at one in a newspaper or magazine. Do we allow ourselves to be vulnerable to the horror depicted, or do we create an emotional distance?

During the Vietnam war, photographs were instrumental in creating anti-war sentiment in this country. Who can forget the photograph of the South Vietnamese general, pistol in his outstretched hand, shooting a civilian in the head? Who can forget the photograph of the naked, nine year old Vietnamese girl running along a road, her back burning from a napalm attack, her mouth open in a scream we could hear, though a photograph has no sound?

In a French photography magazine I subscribe to, I saw photographs from the devastation of Hurricane Katrina that no U.S. newspaper or magazine published. In Paris Match I see photographs of the environmental disasters taking place in Africa and Asia, as well as photographs from the war in Iraq that U.S. publications do not publish because they are considered to be too violent and explicit.

Obviously the Bush administration knows how dangerous such photographs would be to its execution of this obscene war which is why the Defense Department does not allow photographs of the flag-draped caskets returning to American soil. But photography also poses a danger to us who have cameras in our cell phones, whose lives are surrounded by images every waking moment.

Do we force ourselves to make our hearts vulnerable to the atrocities of our time, or do we simply point our cell phone cameras and make sure the pictures are in sharp focus?

In other words, what is our relationship to the suffering of others?