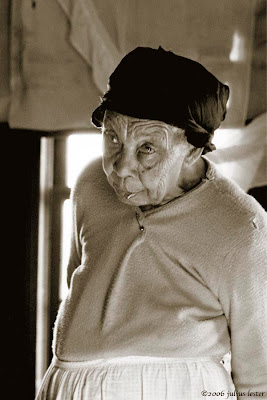 "Deadwood", the HBO western, is the most brilliant television series I have ever seen. Every character, historical and fictional, is compelling, and each character is shown in the full complexity of his or her humanity.

The mind behind the show is that of David Milch, who was also the mind behind "NYPD Blue", and one of the minds behind "Hill Street Blues". Milch has written a book about "Deadwood," in which he writes about the west, the town of Deadwood, and the show. The book also includes short essays by many of the actors about their particular characters, how they understood the characters, the back stories they created to help them understand, as well as excerpts from primary sources, primarily newspapers and photographs, and photographs of scenes from the show printed to look like 19th century photographs.

I don't know that I have ever been in the company of a writer as stunningly brilliant as David Milch. I could have read hundreds more pages by him about Deadwood or anything he cared to write about. What he has created in the show and this book is a commentary on contemporary America by looking at a town in South Dakota in the 1870s.

Milch writes: "I settled on a story about Deadwood, because the camp came together in the mid-1870s, deep into the Industrial Revolution, and yet it was a reenactment of the story of the founding of America, and a reenactment, too, of the story of Original Sin. I suppose I accept Hawthorne's definition of Original Sin as the violation of the sanctity of another's heart."

And this quote: "Freud wrote about the 'narcissism of minor differences,' saying that the most violent antagonisms are between peoples or individuals who feel a need to differentiate themselves because they feel so similar, and they are so uncomfortable in their felt similarity."

I've never read a more succinct explanation of the tensions and conflicts in the Middle East, or, for that matter, the United States.

The book is Deadwood: Stories of the Black Hills by David Milch.

I knew the woman only as "Miss Laura". She lived in Itta Bena, Mississippi, a small town on the edge of the delta. I stayed with her for a month when I was photographing and collecting music in the area in the spring of 1966.

Of her dead husband, she said: "Me and the flies was the last ones to leave that black man."

Miss Laura didn't eat fish, because, "So many black folks been through in these rivers for the fish to feed on, that to eat a fish would be like eating myself."

One afternoon a white man came to her house and told her that if she continued to let me stay there, she would be taken off welfare. With tears in her eyes, she asked me to leave, which I did, of course.