Life is this simple... 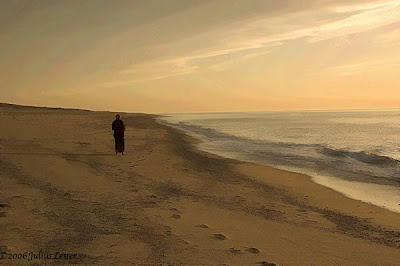 "Life is this simple: We are living in a world that is absolutely transparent and the Divine is shining through it all the time. This is not just a nice story or a fable. It is true."

The Hidden Ground of Love: Letters of Thomas Merton on Religious Experience and Social Concerns Selected and Edited by William H. Shannon (1985, ISBN 374-16995-0)

Thomas Merton (1915-1968)was a Trappist monk, who, from his life of solitude at the Abbey of Gethsemane in Kentucky, wrote books, essays, poems, and letters that influenced many, especially during the civil rights and anti-Vietnam War movements of the 1960's. My mother gave me a book of his essays when I graduated from college in 1960. I had never heard of him. After I read the book, I was surprised my mother had bought it for me because she disapproved of my need/desire for solitude. After reading that first book, Merton became one of my spiritual guides, though he was a Roman Catholic convert, and I would become a convert to Judaism.

Even though Merton lived apart from the world, his appeal to me and others was he wrote about how to be a monk in the world. And, in essence, this is no different than mystical Judaism's urging one to infuse the secular with the sacred each day.

A few years ago I began to feel that the next step in my spiritual odyssey was to learn to see, i.e. to look at a person, a flower, a building, etc., and not call its name and thereby dismiss it, but to truly see its utter aliveness. To see truly is to truly experience that everything and everyone LIVES! When we see truly, we enter into the I-Thou relationship with a blade of grass as well as those with whom we share our lives. Yes. Life is just this simple.

Number 9 in the series, "Alone, Herself." The photograph was taken at a beach in Provincetown, Cape Cod, Massachusetts, and transformed into digital art in Photoshop.